There are 16 clubs in the top flight of professional Portuguese football, in the Primeira Liga.

Benfica have won the last four consecutive league titles. With 79 domestic titles and 82 titles overall won, Benfica is the most decorated club in Portugal. Internationally, Benfica won the European Cup titles in 1961 and 1962. They have reached ten European finals, and at the end of the 2016–17 season, were ranked ninth in the UEFA club coefficient rankings, the best position of a Portuguese club.

Founded in 1903, by British entrepreneurs and Portuguese textile workers, Boavista has won 9 main national titles won, the most successful after the big three.

Founded in 1918, the club plays its home matches at the Estádio Marcolino de Castro with a capacity of 5,500 spectators.

Founded in 1919, Belenenses won the 1945–46 Primeira Liga, making them the first of two clubs aside from the Big Three to win the league title. The club also have 6 Portuguese Cup titles and is considered the “Big Fourth” of Portuguese football. 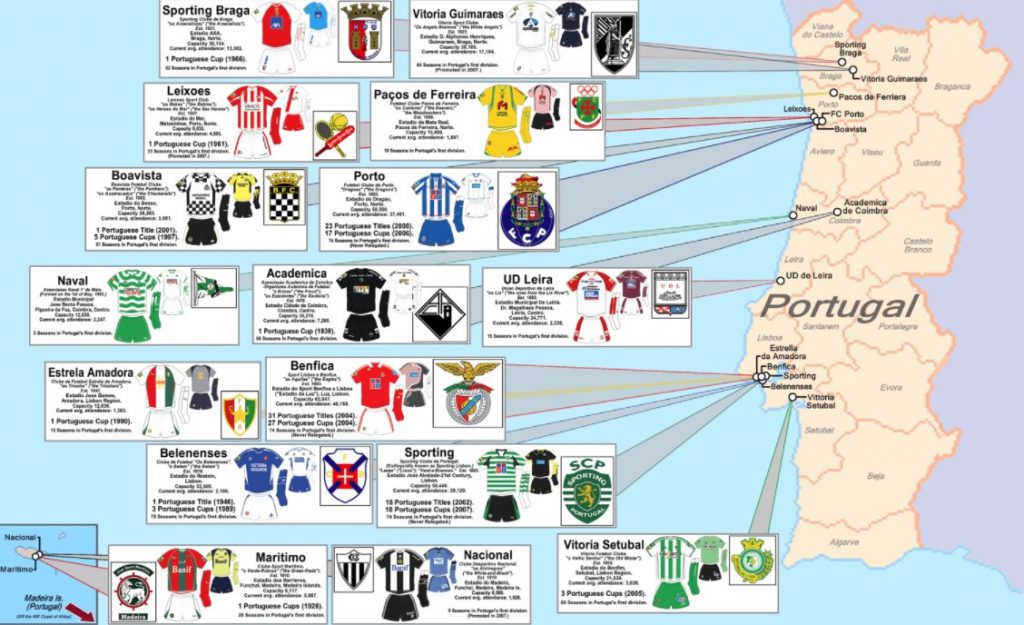 The club’s reserve team, Marítimo B, compete in the third division. The club has won one national title, the Campeonato de Portugal in 1926. The club has participated eight times in the UEFA Cup/Europa League. Marítimo reached the group stage of the Europa League.

The club currently plays at the Estádio do Clube Desportivo das Aves. It has played three seasons in the top flight and has a very successful footballing trial system helping younger players come through the academy.

Currently playing at the 7,000-seat capacity Estádio da Mata Real. The team qualified for the UEFA Cup for the first time in 2007 and the 2013–14 UEFA Champions League play-offs.

Futebol Clube do Porto is one of the “Big Three” having appeared in every season of the Primeira Liga since its establishment in 1934. With a total of 74 official trophies, including 27 league titles. Porto have won seven international trophies, including the European Cup/UEFA Champions League in 1987 and 2004, the UEFA Cup/Europa League in 2003 and 2011, the UEFA Super Cup in 1987, and the Intercontinental Cup in 1987 and 2004. Together with Barcelona and Real Madrid, Porto have the most appearances in the UEFA Champions League group stage.

Since the club’s establishment in 1939 it has won nine trophies.

The club has not yet won any major honours, but have participated in the Primeira Liga for several seasons.

Since the beginning of this century, Braga gradually became Portugal’s most successful clubs after FC Porto, Sporting Lisbon and Benfica. The club has competed in European competitions, becoming the only Portuguese club to win the last ever UEFA Intertoto Cup in 2008 and reaching the final of the UEFA Europa League in 2011.

One of the “Big Three” football clubs in Portugal that have never been relegated from the top flight of Portuguese football since its establishment in 1934. Sporting are the third most decorated Portuguese football club, with 46 titles in all the Portuguese competitions and one international title, the 1963–64 European Cup Winners’ Cup. Sporting Lisbon’s youth academy system has developed players including Ricardo Quaresma, Paulo Futre, Nani, Simão and Ballon d’Or recipients Luís Figo and Cristiano Ronaldo.

Vitória de Guimarães has finished third in the division on four occasions, most recently in 2007–08.